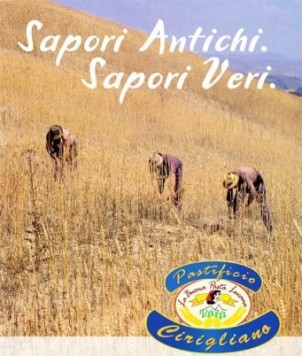 The Cirigliano Company was founded by Vito Cirigliano and his wife Maria Iacovino in the early 60’s of the last century.

Vito and Maria, after an immigrant work experience in Switzerland, decided to return to their hometown, Castelsaraceno, located in Southern Basilicata region, formally known as Lucania. Together, with two of their family members, they opened a small bakery in their hometown. After a few years, Vito Cirigliano decided to open a mill in Spinoso, where he produced durum wheat flour as well as regular flour. Vito Cirigliano realized that the mill in Spinoso was too small for his growing family, so he decided to move to Moliterno, to open a larger mill. While his wife Maria Iacovino worked in the bakery in Castelsaraceno and cared for their four children, Vito Cirigliano began working in the new mill.

After their four children started High School, the entire Cirigliano family moved to Moliterno, never forgetting their hometown, Castelsaraceno, where they returned every weekend. In the 80’s - along with his wife and their four children, Angela Maria, Egidio, Vincenzo and Roberto - Vito began producing artisanal pasta in the typical regional and national shapes.

The Cirigliano Company, around the second half of the 90’s, decided to resume its original bakery activity in CASTELSARACENO, which is currently managed by the eldest daughter, Angela Maria. The three brothers Egidio, Vincenzo and Roberto continued the milling activity along with the pasta manufacturing for a few years and then decided to concentrate on the latter activity only, by closing the milling and expanding the production facilities of fresh and dry pasta.

As a family business, the company has been from its origin very committed to quality and safety, starting from the selection of the finest raw materials. The flour comes from nearby Apulia region and the eggs are purchased from the best Italian farms in Northern Italy. The spring water, a fundamental ingredient for high quality pasta, comes from the uncontaminated Sirino and Raparo mountains, which are  surrounding the Cirigliano factory. As a result, the company is well known for its unrivalled FETTUCCINE CIRIGLIANO, used by the best chefs in Basilicata for the preparation of pasta dishes with porcini mushrooms.

Since the beginning of its activity, the Cirigliano Company has always been using the traditional production techniques: BRONZE DYES that give pasta a rough surface permeable to sauces, and SLOW DRYING (from 36 to 48hours at low temperatures) for keeping unaltered wheat protein and nutritional value.

We use our own and third-party cookies to facilitate your navigation on the site, analyze performance and provide commercial content profiled according to your interests. To find out more, visit the page cookie policy.